As a longtime alt-rightist, Denton sometimes wished his movement didn’t rely so heavily on code. He had always considered himself honest, but he could also understand the need to avoid losing his social-media accounts by writing “Google” instead of the N-word, “Skype” instead of the K-word, et cetera; due to decades of liberal brainwashing, most Americans had turned into snowflakes, incapable of handling the truth about race. (Denton didn’t have a drop of non-Aryan blood, nor had he ever boned a non-Aryan chick, nor had he ever even remotely considered boning a guy. We readers can’t always enjoy delicious irony.)

PornHole, my favorite Internet site for free smut, now offers nine different golden shower videos starring nine different Donald Trump impersonators.  I don’t know who does the showering in these videos, because I’ve never watched them and shall never do so, not only because I voted for Jill Stein, but because depicting Trump as sexually-uninhibited pretty much normalizes him and his ultra-right-wing buddies.  Plus he’s bragged about his carnal exploits.  Not showing him getting any would piss him off more, no pun intended.  (By the way, even radical guys such as me like jerking off.  Even the revolution needs Kleenex.)

Five minutes into my supervisor’s PowerPoint presentation, I wanted to beat the living crap out of him, meaning I’d grown more tolerant in my old age, ha ha, but not too tolerant.

God, what a liberal jackass—no one outside of wine-and-cheese parties cares about sustainable farming.  I can’t wait for President Trump to stamp out this PC bullshit.  If we didn’t alter the environment to raise crops, millions of people would starve.  I dunno if Trump the real-estate guy knows anything about agriculture, but someone in his administration probably does.  You can’t run the government with a narrow mindset.

Written on the spot

A year into pursuing her MFA in creative writing, she quit graduate school because she thought her instructors had turned her into a New Yorker-style author, one who, as she put it on her blog, “poops out polished turds about the white upper-middle-class, with at least one big ol’ fuckin’ epiphany per story.  To paraphrase Huck Finn, I don’t want the cultural gatekeepers to ‘sivilize’ me.”  (She had leafed through Twain’s novel once.)  Today, she works at a gourmet cupcake shop in the upper-middle-class bohemian part of town but considers herself highly sivilized because she doesn’t spit into the batter.

Written on the spot

In a glass of whiskey, a shark chomps off a swimmer’s head.  Chocolate icing sports a vulva.  Everything contains numerous SEXes and FUCKs and KILLs.  For four decades, as one of Madison Avenue’s top artists, he secretly embedded subliminal words and images into print advertisements, winning eight or nine industry awards in the process.  Now, as he lies dying of stage-four pancreatic cancer in his hospice bed, he does not regret keeping the economy healthy via tapping into (some would say exploiting) consumers’ subconscious fears and desires.  Rather, he regrets not flying to Mexico with his girlfriend, the love of his life (he now realizes), on vacation in 1981.  Neither of them had previously gone there; he watched her choose that country when she tossed a dart at a map of the world she had taped to his apartment wall.  He worried they would risk their lives in what he called that Third-World hellhole.  She called him racist.  He called himself rational.  After uttering FUCK followed by YOU, she tore down the map, crumpled it up, hurled it down at the floor, and left his apartment.  They never spoke to each other again.  She traveled to Mexico a few months later and ended up moving there; the last he heard, she had married some left-wing labor activist and started working at a non-governmental organization.  Maybe Mexico did have something.  Maybe it has subliminals.  Of course it does; they circle the globe, from the Third World to the First.

Oh, shit, the pain.  He thinks his morphine drip has broken. 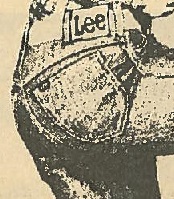 Filler: Pump up the Jam